“If my engine were in general use we would never hear of monoxide deaths or smog caused by these engines.” – Russell Bourke 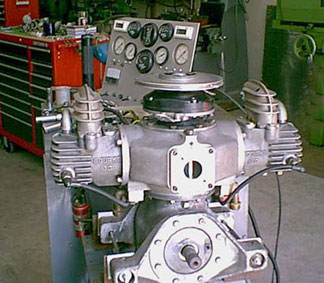 The Bourke Engine was designed by Russell Bourke in the 1920s, as an improved two stroke engine. Despite finishing his design and building several working engines, the onset of World War II, lack of test results,[1] and the poor health of his wife compounded to prevent his engine from ever coming successfully to market. The main claimed virtues of the design are that it has only two moving parts, is light weight, powerful, has two power pulses per revolution, and does not need oil mixed into the fuel.

The operating cycle is very similar to that of a current production spark ignition two-stroke with crankcase compression, with three modifications:

The pistons are connected to a Scotch Yoke mechanism in place of the more usual crankshaft mechanism, which slightly reduces the acceleration of the pistons.

Robert Bourke taught engine maintenance at the Unites States Air Service School at Kelly Field, Texas in 1918. The Army Air Force was impressed in 1932 when he built a working prototype and awarded him a contract to build an aviation prototype. According to legend he did. . . .
The crank is enclosed and is isolated from piston ring blowby thus this engine doesn’t require an oil filter! The piston rods go through the crank housing, keeping the pistons isolated from the crank oil. The engine is rugged, the piston cylindrical rod is supported at two points, the rod is a straight throw, there is no piston slap or cylinder wear. . . . the Bourke engine runs smoothly on low grade fuels, even 20 Octane, hydrogen or highly diluted alcohols! The Bourke engine has cool exhaust, what this implies is very impressive thermal efficiency. The reason for this is the incredibly long dwell angle as the piston pauses at TDC longer because of the Scottish Yoke design.

Because of this inherent design and very high 15:1 to 24:1 compression ratio, the fuel is burned before the piston reacts, thus Bourke’s engine is similar to a gun firing a projectile, as the hot burnt gas expands the temperature cools, to the point that during the exhaust stroke the gas is cool enough to touch at the exhaust port. Regular engines are still combusting during the power stroke but Bourke’s engine burns most of the fuel before the piston starts the power stroke.

Lower compression gasoline engines (8:1) are not good at complete combustion. In fact at car races you can see flame shooting out the exhaust pipes – the fuel is still burning even as it is exits the cylinder and is vented to the atmosphere.
– www.veteranstoday.com/2013/08/19/the-bourke-engine-could-revolutionize-private-aviation/

Bourke cycle engines are the most efficient form of internal combustion piston engines on the planet. Tested emissions of the Bourke 30 are only 80 ppm HC and CO!
The Bourke engine is public domain. All patents expired.

The Scotch yoke is a mechanism for converting the linear motion of a slider into rotational motion or vice-versa. The piston or other reciprocating part is directly coupled to a sliding yoke with a slot that engages a pin on the rotating part. The shape of the motion of the piston is a pure sine wave over time given a constant rotational speed.

The advantages compared to a standard crankshaft and connecting rod setup are:

Russell Bourke, the inventor, stated he tested the engine for 2,000 hours of marine use on an outboard motor unit with no detectable wear.

Its chief claims are these:

The July 1954 Issue of Hot Rod Magazine Ran A fairly detailed report on the Bourke engine. 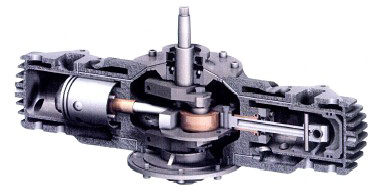 There are fewer moving parts, therefore, the engine is lighter in weight than most motors, yet it has far greater power out-put (the engine can be operated at much higher rpm without appreciable power fall-off). The engine has no mechanical sounds and can be operated in any position desired.
We would like to draw special attention to one additional point. The Bourke engine operates on low quantity fuel with practically no exhaust fumes, no frame and very little heat.
As the reporter for Hot Rod Magazine said:
“Practical economy was the designer’s prime requisite. It can be manufactured cheaply, can be run for exceptionally long periods of time without need of being torn down (parts in one unit after more than 2,000 logged hours are still as good as new – – as is the oil that was used during the entire running time) and it is economical to operate”.

“Revolution of the Free-Piston Engine”

Popular Mechanics, September 1950 pages 155-188+
This is another new (in America) concept of engineering.

“In your present engine there are masses of moving metal – – connecting rods, crankshaft wheel. The new engine eliminates these parts. Two piston slide freely in a horizontal cylinder.”

This engine requires no spark plug. It is quiet, vibration free, light. It is ideal for aircraft.

“Further, the free-piston is by all odds the most efficient power plant ever developed — an important point since the world stock pile of fuels is steadily dwindling”

This report goes on to give the history of the free- piston development. There were crude models built as long as 100 years ago. In the 1920’s the Swedes invented an awkward model. The Germans used such an engine in their war-time submarines.
The United States Navy began studying the concept in 1943.
The report goes on to state:

“Applications to automobiles appear to be well in the future, but such applications have dazzling appeal. A free-piston engine would be unbelievably quiet and vibrationless. It would be so small that it could be placed anywhere that it would give 50 to 60 miles per gallon of fuel – – – diesel oil or kerosene.”

“In sum, there is hardly a place where fuel is converted into energy that the new engine won’t find application. It is more versatile than the diesel, three times more economical than the open-cycle gas turbine, cheaper than the steam plant. Prophecy is never completely safe with any development as new as this. But everything indicates that the free-piston engine will have quite as large an impact on all our lives in the second half of the 20th century as the conventional internal-combustion engine had during the first half.”

The above report is not an isolated article. Books have been written on the free-piston engine. Its use in stationary power plants is widespread. Details of its production and how it works are found in Business Week, April 25, 1953, pages 101 – 106.
FURTHERMORE
General Motors Corporation has a free-piston car. See the report with accompanying photos in the July 1956 issue of Popular Science.

note:
There was once a Bourke Engine Project L.L.C. but for years there has been no news of any progress and now, 2017, it seems that the main participant, Rodger Richard, has long since given up and wants no more publicity. see his comment on 4-28-2017, o.k.

Bourke Engine Project L.L.C. Documented test results from the Roger Richard prototype engine: The test instrument used was a Hamilton Standard, Auto Sense, Model CUISNY 9000 Exhaust Gas Analyzer. This analyzer can detect 10 ppm of carbon Monoxide (CO) and none was detected. The analyzer detected 80 ppm of (HC). These test results will be further certified as part of phase two of this project.

Russell Bourke’s Claim: Matches could be held in the exhaust without igniting.

Bourke Engine Project L.L.C. Documented test results from the Roger Richard prototype engine: A digital thermometer probe was inserted directly into the exhaust gases. All readings were around 200°F with the lowest temperature obtained thus far at 196°F. These tests will be further certified as part of phase one of this project.

Alternatively, for detailed instructions on how to make your vehicle extremely fuel efficient ( to run your car on fumes ) see our page

Run your car on vapors